This post helps us understand what passive infinitives and gerunds are, why to use gerunds and infinitives in the passive voice, and how to do it.

Both gerunds and infinitives are verb forms. They, too, are used in both the active voice and the passive voice.

What is a passive gerund?

A passive gerund is a gerund in the passive voice. It focuses on the receiver of the verb (gerund) and functions as a noun.

A gerund can be used in place of the subject, subject complement, object of the verb, and object of the preposition as it functions as a noun.

Teaching you is exhausting.

Here, teaching you is the subject. The speaker is calling an action exhausting, an action the speaker does. The gerund is in the passive voice.

Being taught by you is exhausting.

1. I love being called Babu by my mother.

2. My parents didn’t appreciate being questioned.

3. We are not excited about being taken to the function.

4. Ashish is proud of being hired by Samsung India.

(The speaker is proud of an action that he received.)

5. Being fired from the job is a thought that often scares me.

(Receiving an action, which is getting fired, scares the speaker here in the sentence. The passive gerund refers to an action that the subject receives, not performs.)

(We hate receiving the action of lying. The passive gerund is the object of the verb ‘hate‘.)

There are two types of gerunds in English:

Both the gerund types can be used in the active voice and the passive voice.

It is a gerund form that refers to the present time or the same time the main verb of the sentence refers to.

AV: I enjoy teaching you.
PV: I enjoy being taught by you.

AV: Judging people on the basis of how they look is stupid.
PV: Being judged by other all the time hampers your confidence.

A perfect gerund is a gerund type that refers to a past action. The time it refers to is always prior to the time the main verb of the sentence refers to.

AV: They surprised me by having won the award.
PV: I am not surprised about having been fired from the job. My manager always had a problem with my way of working.

What is a passive infinitive?

Forms of infinitives in English

It is a verbal (non-finite verb) that refers to the present time in general or the same time (or close) the main verb of the sentence refers to.

Here, the infinitive (object of the verb ‘like’) is in the active voice. It focuses on the doer of the action (abuse), which is the subject. The subject dislikes an action that he performs.

She wants to promote Jon.

The speaker wants an action that she performs. The infinitive is in the active voice as we are focusing on the doer of the action (promote).

She wants Jon to be promoted. (passive voice)

A perfect infinitive is a form of infinitive that refers to a past action. It can be used in both the active voice and the passive voice.

We are proud to have helped the kid.

To have helped the kid is a passive infinitive phrase. It refers to a past action which was performed by the subject.

We are happy to have been helped by the government. (passive voice)

You seem to have annoyed him.

To have annoyed him is the passive infinitive in the perfect form. It refers to an action that the subject performed in the past.

You seem to have been annoyed by him. (passive voice)

Here, the infinitive is in the passive form. It refers to an action that the subject received: it focuses on the receiver of the action.

Fill in the blanks with using the suitable verbal (infinitive or gerund in the right form) in parenthesis.

We, now, know what a passive infinitive and gerund is and how to use them correctly. Feel free to share your question, doubt, or feedback in the comment section, and also, share the post with the people that need it.

What is passive infinitive?

Examples:
1. I like to be helped sometimes.
2. I feel ashamed to have been beaten by that kid.

How do you use passive gerund in a sentence?

Examples:
I love being challenged.
I don’t regret having been cornered.

How is a passive gerund formed?

What is perfect passive infinitive?

A perfect passive infinitive is a form of infinitive in the passive voice. It refers to an action in the past. It is formed using the following structure: to + have + been + past participle 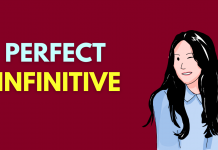 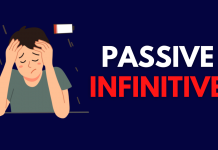