Every sentence in English is a combination of some elements that have their separate roles to play in the sentence. In this post, we will learn the basic elements that we need in order to form a sentence.

Let’s first understand what a sentence in English is.

What is a sentence in English?

A sentence is a group of words that have a particular meaning. It contains two main elements:

To be called a sentence, it (a group of words) must make sense.

All these examples have a group of words. Notice the last three examples don’t make any sense; they don’t render a meaning. So, having a group of words doesn’t qualify into a sentence. It has to have the necessary elements, that too in the right order.

Let’s correct them and change them into sentences.

Parts of a sentence

A sentence has two major elements:

In all the above examples, the subject (italicized) is the part (person) performing the action in the sentence. A sentence doesn’t always indicate an action that the subject performs. It also gives information about the subject.

Types of subjects in English

There are three types of subjects in English:

A simple subject is a one-word subject. It does not include any modifiers.

NOTE: a simple subject does not have to be a single word. It can be a group of words, but it won’t have any modifiers.

Here, the subject is a proper noun. It does not have any modifiers.

A complete subject is a combination of a simple subject and the words that modify it.

1. Some people just make excuses for their failures.

2. People living in this area are very poor.

3. A wise man once said that money is an illusion.

A compound subject is a combination of two or more (generally two) simple subjects or complete subjects. It is joined by a coordinating conjunction, usually with ‘and’, ‘nor’, and ‘or’.

A compound subject can also be joined with correlative conjunctions such as ‘not only…but also‘, ‘Both…and‘, and ‘neither…not’.

What can be a subject?

A subject is generally a noun or a noun phrase but can be any of these:

Noun as a subject

A noun is a name given to something or someone. It’s generally a name of a person, place, thing, animal, emotion, concept, subject, activity, etc.

Noun phrase as a subject

A noun phrase is a group of words headed by a noun. It has a noun and a word or words that modify it.

Pronoun as a subject

Noun clause as a subject

A subject can be a clause. Here are some examples:

Gerund as a subject

A gerund is a progressive form of a verb that functions as a noun.

The last examples of subjects are gerund phrases.

Study these topics in detail by clicking on them:

Infinitive as a subject

An infinitive is the ‘TO + V1’ form of a verb that functions as a noun, adjective, or adverb.

Types of predicates in English

There are three types of predicates in English:

A simple predicate is a verb or a verb phrase (a combination of an auxiliary verb and the main verb). It does not include ant objects or modifiers.

In the sentence, ‘can go’ is the simple predicate. It is a combination of the auxiliary verb (can) and the main verb (go). You is the simple subject here.

‘Called’ is the simple predicate here. It is the main verb. Notice that the verb called has its object and modifier after it, but a simple predicate does not include anything other than a verb (main verb) and a verb phrase (auxiliary verb + main verb).

Study the following example to see how a predicate fits into a sentence.

These are two sentences where the doer of both the actions is the same: Rahul. Calls and tells. These are two simple predicates. When a subject performs two or more actions, we can bring them together and avoid mentioning the subject again in a new clause.

Now, we have brought these two predicates using the coordinating conjunction ‘and’.

A complete predicate is a combination of a simple predicate (verb) and the others parts of the sentence: objects, complements, and modifiers.

I should have listened to my father that day.

‘Are sleeping’ is the simple predicate here. It does not have a complete sentence.

Parts of a predicate

Here are the basic things we have in a predicate:

NOTE: A sentence can be formed using a subject and a verb or verb phrase, at minimum.

But sometimes, with the other information we want to render, that’s not enough.

But it’s important to note that we need only two things to form a subject: a subject and a verb.

A verb in English either indicates the action the subject performs, or shows the state of the subject, or links the subject to its complement.

A stative verb shows the state of the subject. Click here to study stative verbs and their types in detail.

All these verbs (action, stative, and linking) are main verbs. Sometimes, main verbs are combined with an auxiliary verb to show the tense and the number of the subject.

Verb phrase = can do
Main verb = do
Auxiliary verb = can

An object is a noun or a pronoun that receives the action. It is something or someone that the action is acted upon. It sometimes is needed to complete the meaning of the verb. Only transitive verbs take an object. Intransitive verbs can’t do that.

NOTE: an object is not always necessary to have a grammatical sentence. But with certain verbs, it’s vital to use the object of the verb to make the sentence grammatical and complete.

Have what? The sentence doesn’t give a clear meaning without the object. Here, the object (a lot of money) is needed to complete the sentence.

Want what? The sentence again looks incomplete with the object (my help).

But an object is not always needed for the grammatical sanctity of the sentence. Intransitive verbs don’t take an object. Here are some examples:

Sometimes, you can avoid using a direct object after a transitive verb either. The sentence remains grammatical without it. Here are some examples to study:

You study something (direct object). But here, the object has not been mentioned as it’s not important or the speaker does not want to share it.

Eat is a transitive verb; you can eat something. But here, the object of the verb hasn’t been used, and the sentence is still grammatical without it.

Notice, the sentences make sense without the objects (italicized). But adding the object does make the sentence better. But it’s important to note that with some verbs, objects need to be used always.

There are two types of objects in English:

A direct object is someone or something that directly receives the action. It answers the question ‘what’ or ‘whom’.

An indirect object receives the direct object. It is generally a person whom the action is done for. It answers the question ‘for whom’ or ‘to whom’.

Direct object (love ‘whom’)= you

Direct object (play ‘what’) = the piano

Some verbs always take both direct and indirect objects, and that’s why they become a part of a sentence. Here are a few of them:

A subject complement is a word or a group of words that comes after a linking verb and gives information about the subject. It either renames the subject (using a noun) or modifies it (using an adjective).

Linking verb = was
Subject complement = the head of my team (noun phrase, renaming the subject)

Linking verb = has been
Subject complement = my backbone(noun phrase, renaming the subject)

A prepositional phrase can also act as a subject complement, modifying the subject.

NOTE: subject complements are absolutely necessary to complete a sentence and make it grammatical. Without them, sentences are incomplete and ungrammatical.

An object complement is something that complements the direct object: indicates that the object has become. It either renames the object (using a noun) or modifies it (using an adjective).

Removing the object complement changes the meaning of the sentence. Here, the verb ‘call’ doesn’t mean to ring. It’s used differently. They call me what? We need to know that.

Ask again: the company made him what? The sentence looks incomplete without the object complement.

Here, the object complement indicates what Ashish has become: upset. It refers to the change in his state of being.

Verbs that take a direct object and an object complement:

A) A sentence can be formed only with a subject and a verb.

There are two things we need in order to form a sentence, that is a subject and a verb.

B) A linking verb takes a subject complement.

Here, my father is a subject complement. The sentence without it (My father is) incomplete. So, it’s not that you can always form a sentence with a subject and a verb. The type of the verb and what you want to say decide the elements that need to be there in a sentence (essential elements).

C) Some verbs must have an object to complete the meaning of the sentence.

Do these sentences make complete sense? These are incomplete without the direct object. Let’s complete them adding an object of the verb.

Now you know what a sentence is and what essential parts it has. Do share the lesson with others to help, and do share your questions and doubts in the comment section. 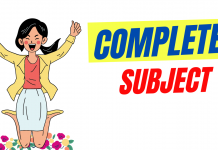 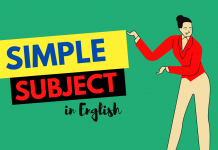 A simple subject masterclass in English 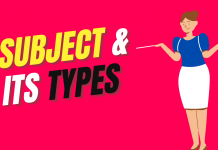 Subject and its types in English